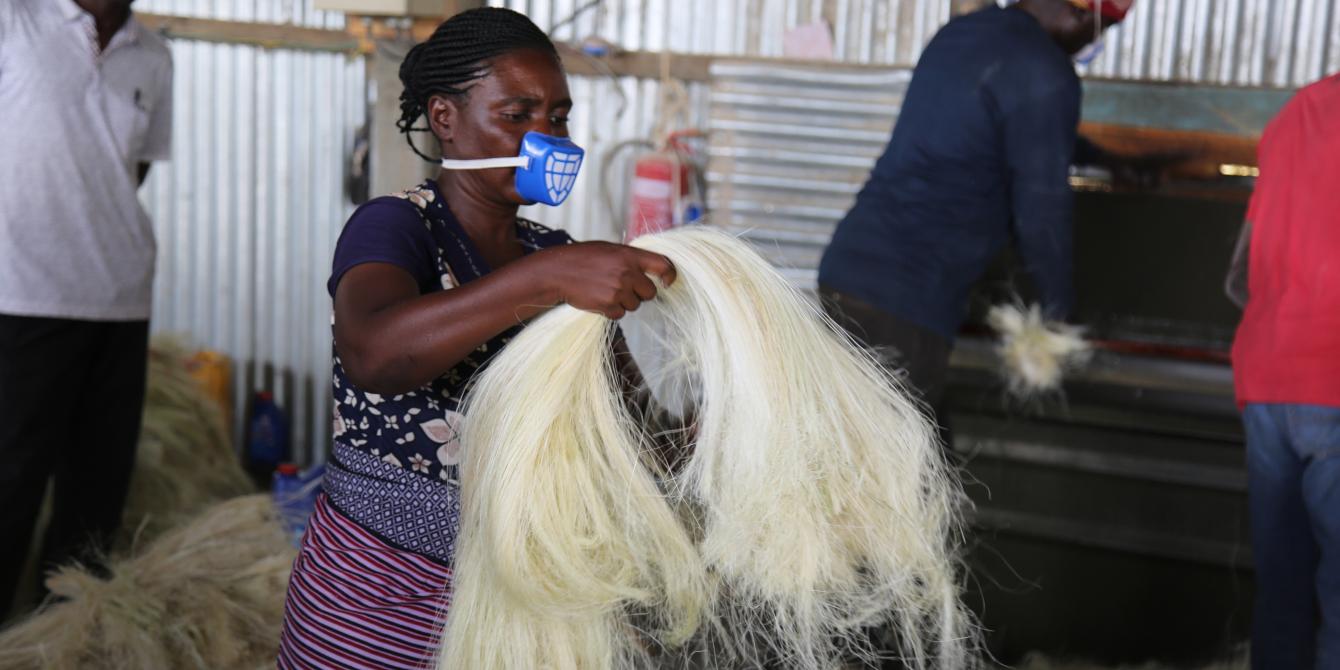 These are words of Tabu Hashimu (47) who makes USD3,700 from cotton, sisal and groundnuts per year in the village of Mipa in the district of Kishapu, Tanzania. Her husband died 21 years ago, leaving her with three little girls and a four-month baby on the way. Life was not easy but she had a seven-acre farm that her husband left behind. She and her children had no option but to farm.

“I had to teach them how to survive, I would set a portion of the farm, around an acre, for each of them to farm. In two days, we would finish an acre. We worked very hard because we did not have anything else. Life was very hard,” narrates Tabu Hashim.

In 2008 Tabu was hired at the cotton cooperative union in Kishapu, as a cotton collector where her role was to receive cotton from farmers and record data in the entry sheet. Although she only has primary education, Tabu is good at mathematics. So, she decided to cultivate cotton and started earning USD230 per season. To increase her income, she also opted for groundnut farming.

“I divided the farm: one acre for cotton, two acres for rice and another for groundnuts. On average I produced ten to fifteen bags of rice paddy, and twenty to twenty-five bags of groundnuts per year,” explained Tabu. She used rice for food consumption and sold a little to meet some of her needs. She used to make USD470 per season from groundnuts. This was before her involvement with Oxfam’s sisal value chain intervention in the district.

In 2010, she was nominated as Treasurer of the MWAMKO (Awaken) group in her absence because the members knew her role at the cooperative. The group was organised and supported by Oxfam, as a saving and lending community, and had 30 members (16 women and 14 men).

Later, in 2011, MWAMKO group was transformed into a sisal producers and processors group, funded by Oxfam Hong Kong. After forming the lending community, they were sensitised to start sisal farming and were taken on a study tour in the Tanga region to learn about the sisal business.

Tabu was one of the members who was loaned a processing machine costing USD3,000 that was manufactured by the Small Industrial Development Organisation (SIDO) along with USD1,000 cash in hand. She was taught how to operate the machine and how to manage finances. Tabu started processing sisal fibre from the leaves of sisal hedges that she bought from producers.

Tabu would initially pay USD0.20 per kilogram of, and because the process machine was mobile she would take it to where the leaves are. To make more profit she decided to plant one acre of sisal.

She is now produces 2,000 kilograms of sisal fibre per year which she sells at the price of USD1.30. She now makes more than what she used to earn before her involvement with the project. Annually she makes USD3,000 from her sisal business.

“I quit my job as I have a lot to do, and I now have people working for me. My husband left me with seven acres but I have purchased nine more acres on my own. I have paid for my two-daughters’ pre-nursing course for one year which costed me USD500 and I pay for my other daughter’s tailoring course which cost me USD130”, Tabu boasts. Tabu feels equal to her peers who have received more education than her because of how successful she is. This season, Tabu plans to make USD4,000.